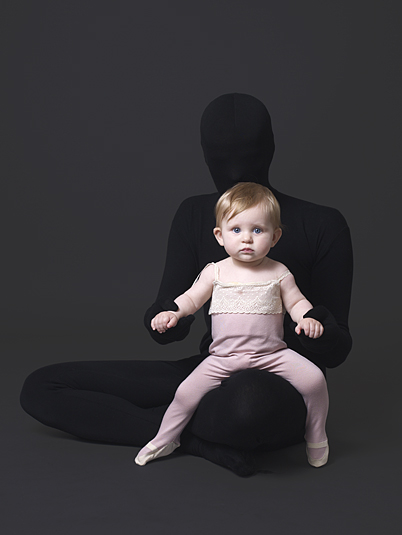 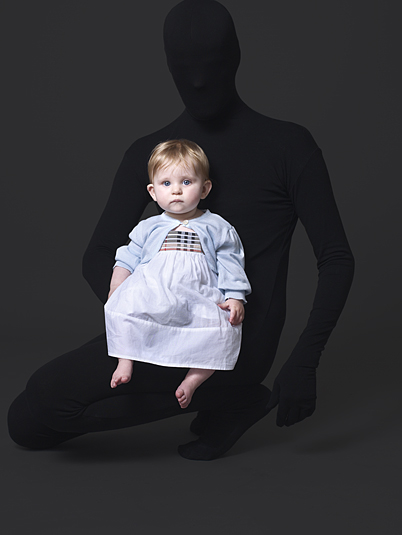 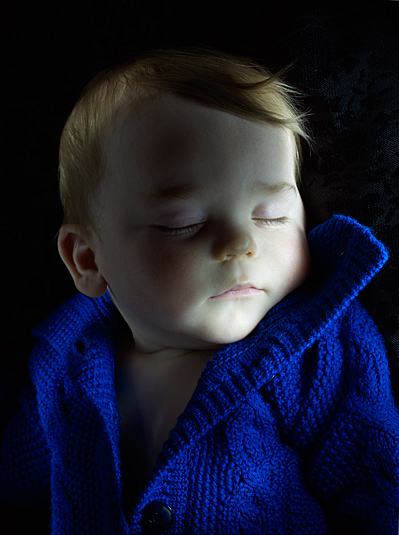 If you haven’t already seen it, I strongly suggest you read about the fascinating Hidden Mothers phenomena in Victorian photography, and its possible relationship to the tradition of post-mortem photography.

Amsterdam-based fashion photographers/artists Anuschka Blommers and Niels Schumm have put a morbid contemporary twist on the history of this imagery, recycling the aesthetic conventions of hidden mother and post-mortem photography into a commercial kid’s wear fashion shoot.

In the first part of Blommers and Schumm’s ‘Kidswear’ series, an anonymous figure clothed in a full black body suit holds the child against a dark backdrop. The children model clothing that is bright and spunky, at odds with the shadowy figure in the background. The dark figures are not themselves ominous: in fact, they usually seem to tenderly embrace the child as a mother would.

But there is something undeniably unsettling about this act of hiding in plain sight, a feeling which also permeates the Victorian hidden mother photographs.

This subtle uneasiness is extended in the next part of their series, which focus on the serene faces of presumably sleeping children. The lighting quality give the babies’ faces a deathly pale cast, enhanced by the intense stillness of the image.

To me, their aesthetic directly references the haunting tradition of Victorian post-mortem photographs of children: 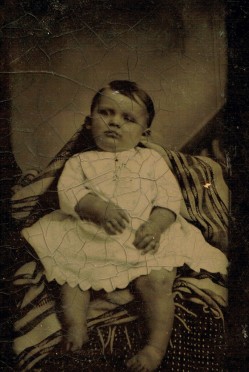 Although I do think Blommers and Schumm probably approach this aesthetic with a sense of irony, the idea of referencing these visual tradition to sell kid’s clothing is pretty twisted. Their photographs are hauntingly beautiful, however, and they certainly capitalize on the morbid appeal of these photographs effectively.

Do you see a conscious allusion to dead children in their work, or do you think their intentions were more innocent? There are more images in their series, including a set where toddlers are either napping or playing dead in the grass; I encourage you to browse through their digital portfolio and decide for yourself.

// Most images via the artists’ website, but the Victorian post-mortem photograph (on the right) from CVLT Nation, and the dual image fashion spread is from kid’s wear magazine. Original inspiration for this post via fette sans.