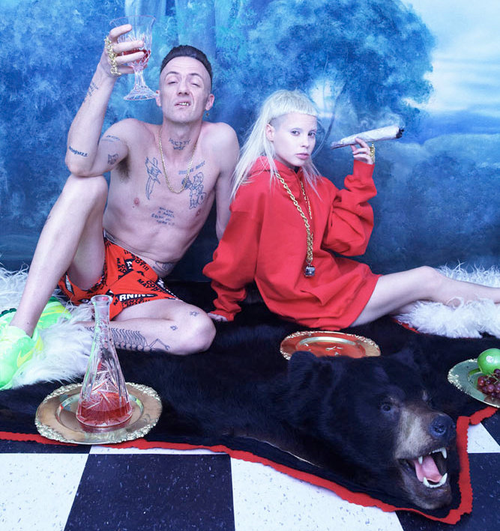 Today’s post comes from ridiculously interesting young artist and scholar, Jessica Draper. Jessica is a South African printmaker from Pietermaritzburg, who is currently doing a practice-based doctorate at the University of Oxford. Both her artistic practice and her written research explore the use of African identities and symbols by white South African artists since the end of apartheid. Giving her no other parameters, I asked her to write a few words about something (anything!) that she finds ridiculously interesting in the world right now. Here’s what she came up with, on South African hiphop group Die Antwoord:

“Die Antwoord is a hip-hop outfit who have recently taken South Africa by storm, and are slowly gaining international acclaim as well. The Cape Town based group consists of three members, “zef rap master NINJA, fre$ futuristik rich bitch ¥O-LANDI VI$$ER and the mysterious beat monster DJ HI-TEK”. Each of these members assumes a stage persona based on an exaggerated Afrikaans stereotype. The singer, ‘NINJA’ classifies the band as “a futuristic rap-rave crew from South Africa who represent a fresh new style called ZEF.

Although the commercial success of their work is mainly through the popular music industry, Die Antwoord (Afrikaans for the “The Answer”) is being categorized more and more in terms of conceptual art. The redefinition of South African values after the demise of the separatist apartheid regime has led to a socio-political climate in which South Africans are attempting to renegotiate their identities. This state of uncertainty is somewhat heightened for Afrikaans people because the institutional segregation that marked the beginning of the regime was originally justified as a means of protecting Afrikaans culture.

Die Antwoord are, in one sense, providing a platform for the rebuilding of pride, as they glamorize and transport the traditional ‘Afrikaansisms’ from old, outdated and shaming, to fresh, new and trendy. However, not everyone agrees with this sentiment. Some people feel that Die Antwoord are mocking Afrikaans culture, and presenting South Africans as non-progressive, foul-mouthed and tasteless. This conceptual collaboration unapologetically appropriates and then embodies stereotypes that the majority of South African society is working hard to shatter. Perhaps in this way they offer some (brief) relief from the epidemic white guilt. Does this make them genius revolutionaries, or crass and antagonizing? Much of their appeal relies on the thin line between love and hate, with a dash of morbid fascination. Public response tends to lie somewhere in the realm of “Stop it, I like it”.

If you ask me, the group spied a gap in the industry and claimed it, successfully. Personally, I hate their music. So much so that I can’t get it out of my head.”

Thank you so much to Jessica! What do you think of the Die Antwoord’s music and the identities they’ve adopted?