For just the right dose of absurd imagery and weird humor for the end of the week, I give you the work of Toronto-based artist Tibi Tibi Neuspiel. His subversive sandwiches remind me of the sort of strange curiosity you would come across in a second-rate tourist museum of curiosities on the side of a highway, alongside a Nixon-shaped eggplant or a perogie with the face of Jesus on it. And I mean that in a good way.

The reason those junky tourist traps are able to stay afloat is the undeniable appeal of their deliciously curious fare, presented in a graphic and eye-catching manner.  Tibi Tibi’s work similarly appeals to this sensibility: his cheeky images are highly approachable, wonderfully absurd, and visually appealing. And just a little bit ridiculous. 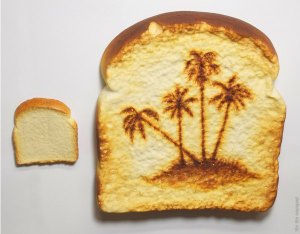 Incredibly, they are not photographs of real sandwiches (as I thought when I first looked at his work), but rather beautifully crafted encaustic wax sculptures. Rather than relying on the veneer of curious appeal, his work instead uses this bizarre allure as a vehicle to draw the viewer into the deeper levels of the work. 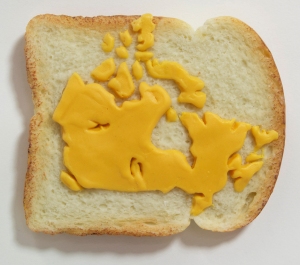 While I was gathering material for this post I came across a terrific article about the political potentials of absurdity in the work of Tibi Tibi Neuspiel, by a ridiculously talented friend of mine, essayist and curator Rachel Farquharson. I urge you to go check out her wonderful and intelligent essay, “Avant-garde Now Redux: Tibi Tibi Neuspiel’s Toast Points” on ArtBarrage, if you’re interested in unpacking some of the deeper levels of meaning in his work.

You can also watch a great video interview with Tibi Tibi here.

For more food-based ridiculousness, visit The Museum of Food Anomalies.