Today’s guest post comes from the fantastic Mrs Marvel, who writes the very cool vintage photography blog Who Were They?. What I love about her blog is that not only does she source out some really compelling photographs from antique stores and old photo albums, but that she makes a real effort to research the people and the stories in the images. To her, the photos are not just nameless ephemera which exist only to fill out a quirky collection of vintage images: these photographs are historical relics, family heirlooms and platforms for digging up interesting stories from history. I strongly encourage you to check out her awesome blog! In the meantime, read on for a taste of some of her photographs, and to hear her amusing take on some musty 19th century styles.

THINGS I’M GLAD ARE OUT OF STYLE – by Mrs Marvel

When a new fashion hits the runways in Paris or New York, consumers respond generally by adapting their wardrobes accordingly. In the 19th century, fashion was shaped first by royalty and the wealthy, and later in Paris by high fashion houses like Charles Fredrick Worth (the first designer to have his label sewn into a garment) who is often credited as the “father of high fashion” as we know it today. Many successful fashion brands followed his example of designing a full line of clothing rather than custom making each item for one customer at a time.

But also like today, there were definitely fashion “misses”. Here are seven things I am profoundly glad have passed out of style.

Take this hat for instance. I can only ask “what in the world?” It’s like a pillow on her head. Perhaps she was going for the Russian shapka look, but missed the mark completely. It makes you wonder what is under there…Can you just imagine wearing this to the baseball game? A movie theater? Or anywhere people might actually see you? 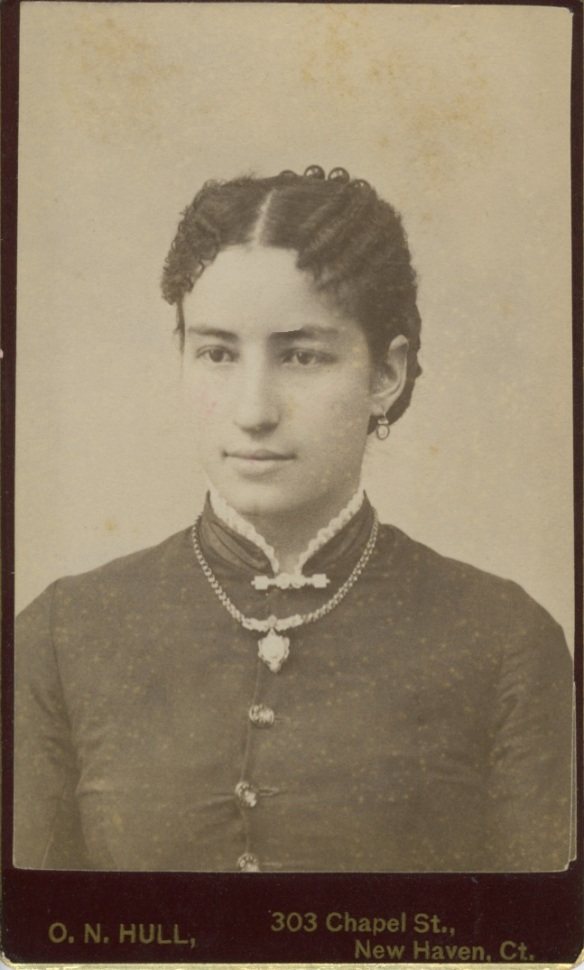 Crimped hair, like this hair. The modern things we do to our hair are bad enough, just imagine putting your curling iron into the fireplace to heat it up. It gives a whole new meaning to those warning tags on flatirons these days!

Shoulder pads tried to come back in the 1980s but thankfully none were as prodigious as these! These sleeves were stuffed with cotton batting or wire frames to keep them in shape. When you consider most women averaged 5’ 2”, this fashion just served to turn them all tiny linebackers! Maybe this is where the early NFL got their ideas for all the protective gear.

This photo is from the 20th century, but I am thankful the swimsuit is gone all the same. Who in their right mind thought it would be a good idea for Uncle Fred to wear a stretchy wool bathing suit in public?? Who knew wool could actually accentuate all that you do not want…accentuated? 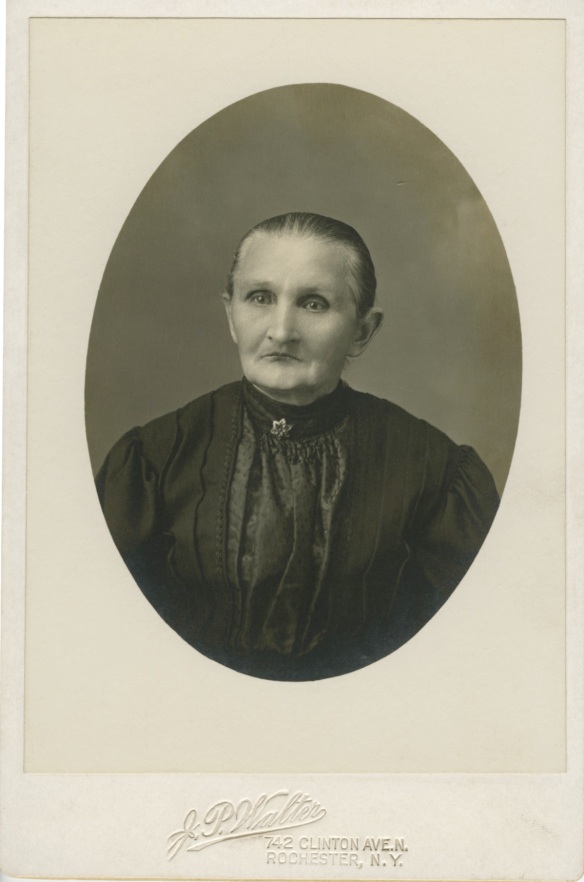 Not a clothing fashion, but man am I glad that the disregard of dentistry has passed out of style. Really, does anything else need to be said here? No? Moving on… 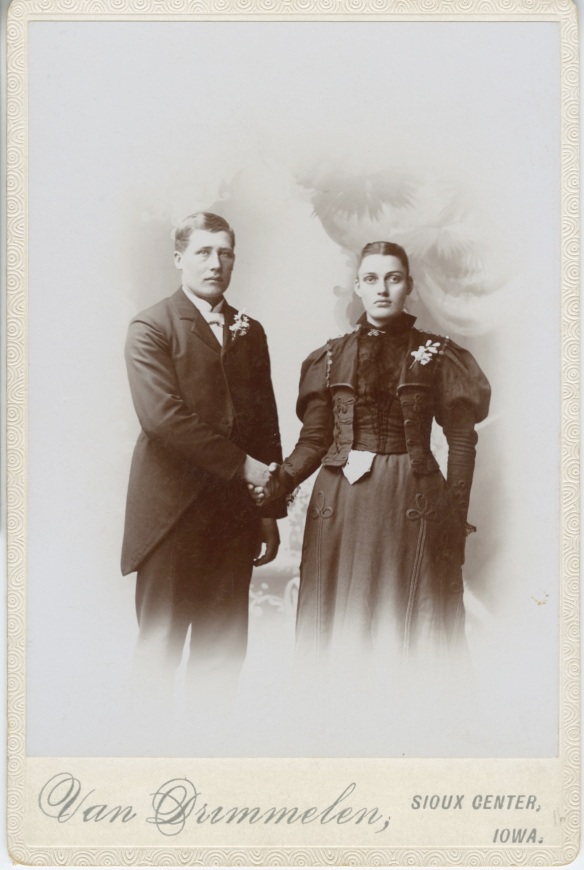 Also not a clothing fashion, but a fashion all the same…the arranged marriage. This couple looks like they are meeting for the first time right as the photo is being taken. Blind dates are bad enough, but just consider meeting someone and then marrying them on the spot. Tied in with the arranged marriage is the dowry. Your dad not only had to find someone he thought would take care of you, he had to pay the guy to do it! Perhaps if there had been better dental work and smaller shoulder pads there wouldn’t have been so many arranged marriages? 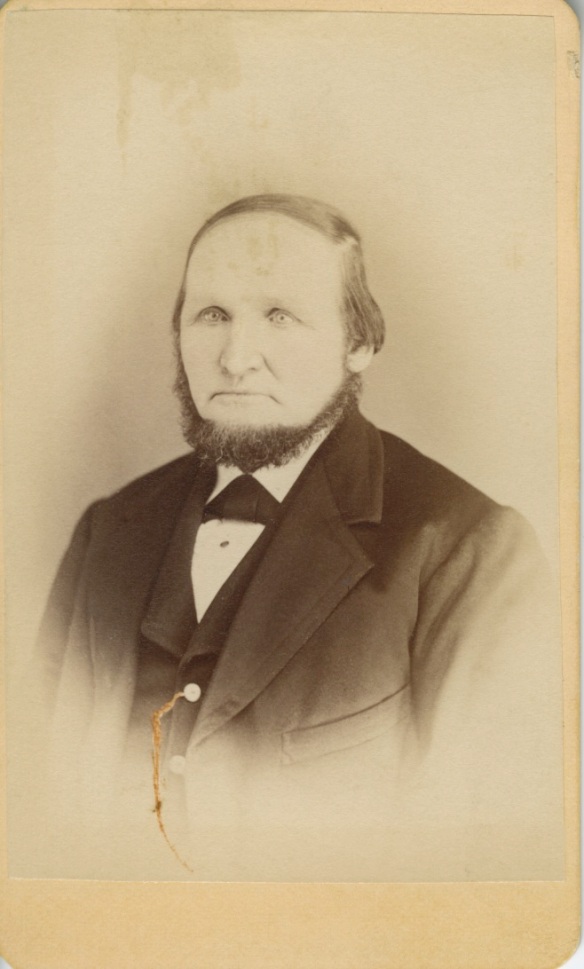 Gentlemen…I give you the Abe Lincoln beard. I am certain there is an Amish guy somewhere with this style but not so much in the general population. This man also has a comb-over which, unfortunately is still “in style” for men. To summarize we had a lot of men looking like an Amish Donald Trump.

Ack now I’m picturing my last blind date in a wool bathing suit, sporting a comb-over, an Amish beard AND carrying all my Dad’s money in his…pocket.

I could go on; there are so many questionable fashions from the 19th century that, combined with the exciting “new” invention of photography, have been documented for our wonderment. While we have our modern questionable fashions (can anyone say Hammer pants?) I shall forever be thankful that these few examples are long, long gone.

( * In the interest of full disclosure, I LOVE 19th century photographs and mean no disrespect toward any of the subjects, their families, descendants, neighbors, friends, or anyone else fictional, real or alien. I hope you will visit my website Who Were They?  and browse through my archives of photos.)

Thank you so much to Mrs Marvel for her great photographs and amusing commentary. Now go visit her blog!