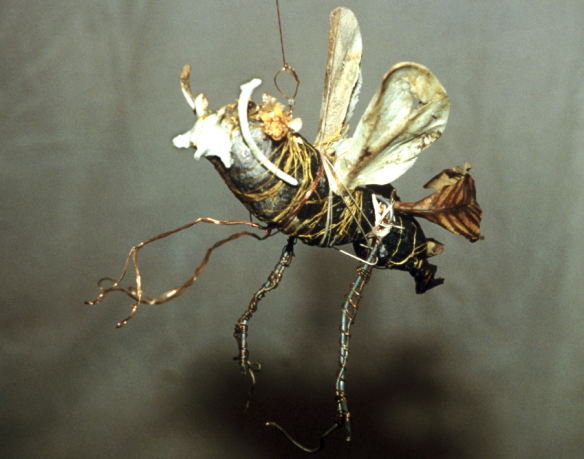 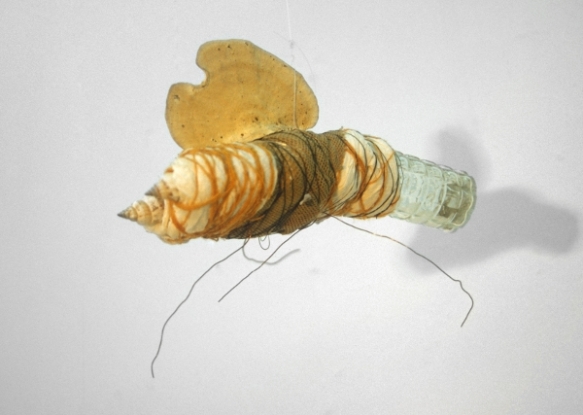 Mostricciatoli is a growing swarm of little creatures made from found materials by British-based artist Tila Rodríguez-Past. This wonderful on-going series started in June 2003 at the Benedictine Monastery of Santa Ana en Camprena in Tuscany, where she made the first monsters from materials found in and around the 15th century monastery.

Using items like rusty wire, metal tubing, leaves, seeds, feathers, porcupine quills, shells, stones, old plastic bags, buttons and sticks, Rodríguez-Past’s sculptures take on the character of the place where they are made. They become the imaginary creatures that lurk in its dark corners. Although her mostricciatoli (Italian for “little monsters”, a term used to describe naughty children) echo the diabolical beasts painted on the famous ceilings of the Battistero di San Giovanni in Florence, Rodríguez-Past transforms monastic monsters into creatures of whimsy and delight.

Suspended from the ceiling in a swarm-like formation, Rodríguez-Past’s little monsters remind me of those remarkable insects who have evolved incredible camouflage capabilities, which also seems like an imaginative and slightly magical invention of nature. Throughout her practice, which spans both sculpture and video, Rodríguez-Past is interested in drawing out these slightly surreal sensations which emerge in the interstices of nature and culture.

As she describes: “My work seeks out the aesthetic strangeness lurking on the boundaries between culture and nature. I create forms and images which do not fit comfortably into either category, and so reveal something about mankind’s struggle with nature.”

Since her initial project within the monastery, Rodríguez-Past’s little colony of creatures has grown to more than a hundred, made of materials sourced from specific locations in Mexico, USA and England. However, her series seems like it has infinite potential to grow:  the forgotten bits and bobs which litter every place now seem like they are just patiently waiting to be animated by her imaginative touch.

// Images and quotes taken from the artist’s website, and from email correspondence with the artist.