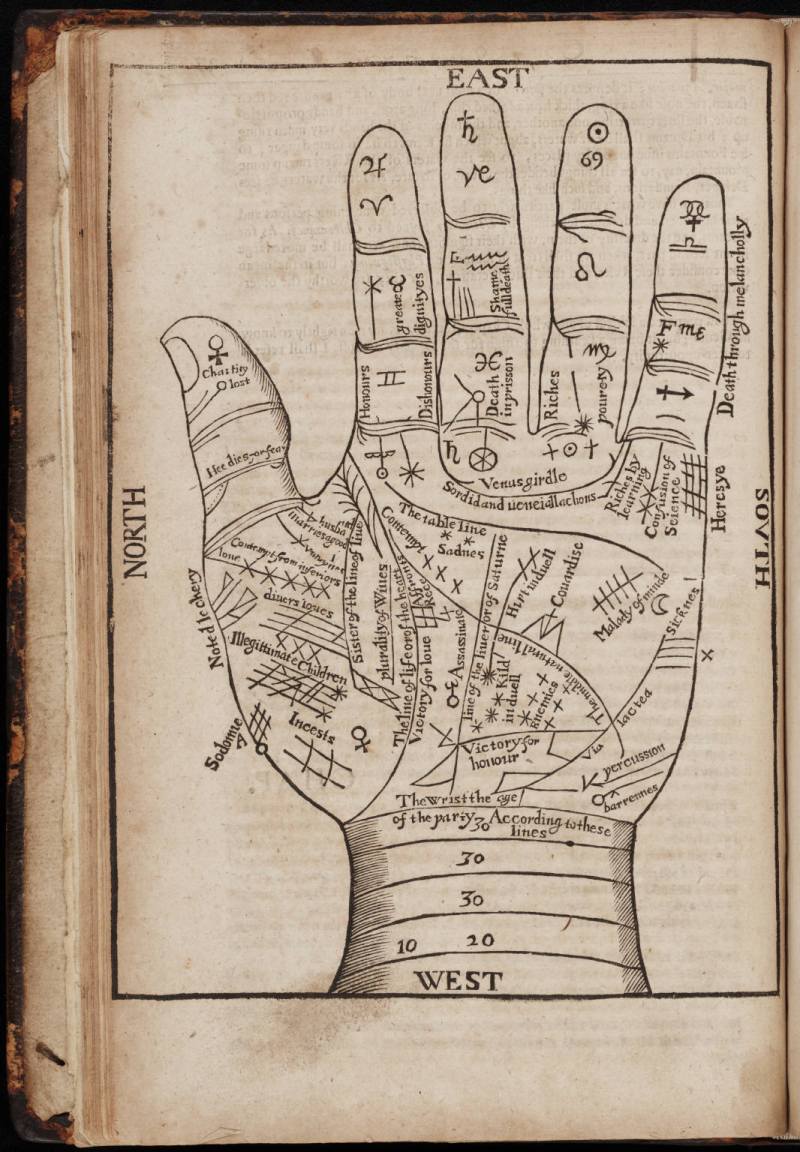 Palmistry, also known as chiromancy, is the art of interpreting lines on the hand to evaluate someone’s character or foretell their future.

The history of palm reading is uncertain, but may have originated in India in Hindu astrology, and spread to China, Tibet, Persia, Egypt and Ancient Greece, at least partly through the traditional fortune-telling practices of the Romani people. After falling into disrepute due to its associations with magic and witchcraft during the middle ages, interest in palmistry saw a resurgence during the 17th century, when scholars began to attempt to find rational and scientific foundations for the practice.

This compelling 17th century woodcut illustration is from Jean Baptiste Belot’s Les Ouevres, published in Rouen around 1640. Belot was a French Renaissance chiromancer, whose studies in palm reading were deeply influenced by physiognomy and astrology, assigning astrological and zodiacal significance to various parts of the hands and fingers. 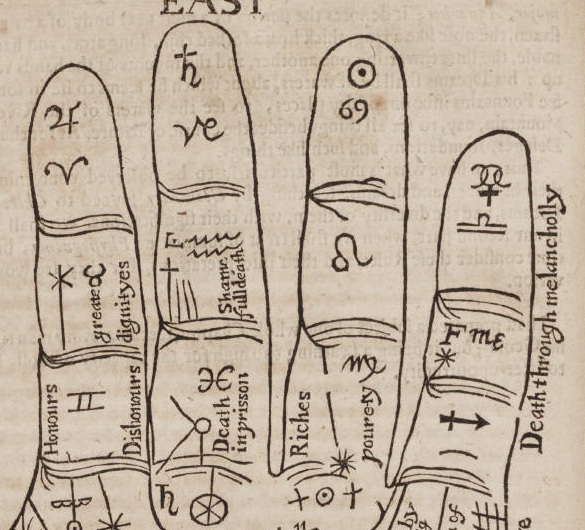 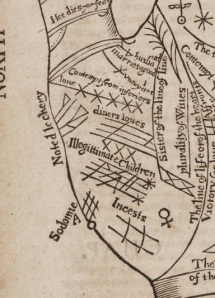 But what I love about this particular illustration is the very specific and often rather scandalous meanings that Belot ascribes to the different areas of the hand. In the fleshy bit under the thumb, the possibilities are especially licentious, with lines for illegitimate children, incests, sodomy, noted lechery, diverse lovers, contempt from inferiors, and a plurality of wives (or is it wines?). On the first line of the thumb: “Hee dies for fear.” [sic] On a more hopeful note, running just to the right of the “line of life or of the heart” is an area which indicates “Victory for love.”

On the opposite part of the palm, there is a 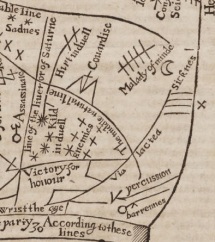 mixed bag of possible fates and personality traits inscribed in the lines of the hand: an area for barrenness, malady of mind, sickness, heresy, riches by learning, assassinated, confusion of science, cowardice, victory for honor, killed  in duel, hurt in duel, percussion (meaning “a beating” in this instance, rather than a percussive instrument) and death through melancholy.

Unfortunately, I am not skilled in the dark arts of chiromancy, so I cannot read my own palm even with the help of this enlightening illustration. Which is a shame, because I would very much like to know my divine chances for surviving a duel, just in case.

// Image via Vintage Printable. Click on the image at the top for a closer look. For further reading on the subject of palmistry, you can access the fascinating Chiromancy, or The science of palmistry by Henry Frith and Edward Heron-Allen (1883) for free online, digitized from the University of Oxford libraries. For more images, see this wonderful collection of vintage palm reading charts gathered by Ana Montiel of On The Present Tense.