Jar of pickled moles from the Grant Museum of Zoology, University College London. (Image: xtinalamb, via Flickr. Click image to go to source)

I am very excited to present today’s post, a bevy of fascinating things selected by curator Neil Lebeter. Neil is archivist curator at the New Art Gallery Walsall, where he is currently working with the very cool Bob and Roberta Smith as part of the Epstein Archive and Gallery. I was lucky enough to work with Neil a couple of years ago when we collaborated on an exhibition of work by Scottish photographer Calum Colvin, and I can personally attest to the hilarious, weird, and ridiculously interesting mind of this guy. Read on for an awesome assortment of rad things from this brilliant up-and-coming curator…

When I was asked to select an object for submission into this fine and noble institution, the task of choosing a single thing proved too difficult. Therefore, please permit me to propose a few different pieces, and indeed entire collections, for acquisition into the museum.

I have worked at The New Art Gallery Walsall for the past 2 years, so I spend the majority of my time indulging in the art side of the museum world. However, I’d like to take things back to where they started. Like many people, what initially attracted me to museums were things that disgusted or terrified me. This feeling was rekindled in 2008 when I discovered the University of Glasgow’s Museum of Anatomy. During a long and relaxing summer between courses, I visited this museum at least once a week for 3 months – it fascinated and appalled me in equal measure. It has all the usual things you would expect from an anatomy museum (all pickled); conjoined twins, a pregnant woman’s dissected torso, a horse’s penis, etc, etc.

What I’d like to share from the Museum of Anatomy is not a particular object or display, more an experience. During one visit, the most extraordinary visit to any museum I have had, a previously unnoticed door had been left open and, inside, there lay over a dozen cadavers, ready for student autopsy. I was completely stunned, yet strangely heartened; museums should always be somewhere where you can feel at ease and open to new information and experiences. If a museum can make the viewer (relatively) relaxed and engaged, even in a room full of corpses, then it is capable of anything.

Admittedly not with the same magnitude as a load of dead bodies, but there is a special quality in some objects that instantly hits you. During a visit to Croft Castle, a National Trust property in Herefordshire, a contemporary art exhibition – titled Tell it to the Trees – was curated in the castle, the out-buildings and surrounding lands. In one of the old stable buildings was Things Can Change in a Day by Mariele Neudecker.

Mariele Neudecker, Things Can Change In A Day, 2009. Wood, steel. (Image: via Meadowarts. Click image to go to source.)

A miniature forest scene, suspended in an unknown liquid, it gives off the most intense and vivid notion of the forest and is one of the most captivating pieces of contemporary art I’ve ever seen. Now, as the Curator of The Museum of Ridiculously Interesting Things will attest, I have an unhealthy obsession with the work of David Lynch. In his pioneering series Twin Peaks, there is a recurring motif of The Woods. A never fully explained presence exists in The Woods surrounding Twin Peaks that has to be both feared and respected. In Things Can Change in a Day, Neudecker is encouraging us to bring our own associations of the forest to the work – these may be positive, negative or both. For me, the piece captured the notion of The Woods perfectly; something that is at the same time beautiful, haunting and sinister. “…it’s like I’m having the most beautiful dream… and the most terrible nightmare, all at once.”

I would also like to recommend the entire artistic output of George Widener. Widener is a well-known “Outsider Artist” and featured in The Museum of Everything, the runaway success of the 2009 Frieze Art Fair. Widener’s work is baffling and fascinating; obsessively employing numbers and dates to try to make sense of the nonsensical. Friday Disasters is a great example of his work – the use of hard facts to explore something unknown and unknowable. 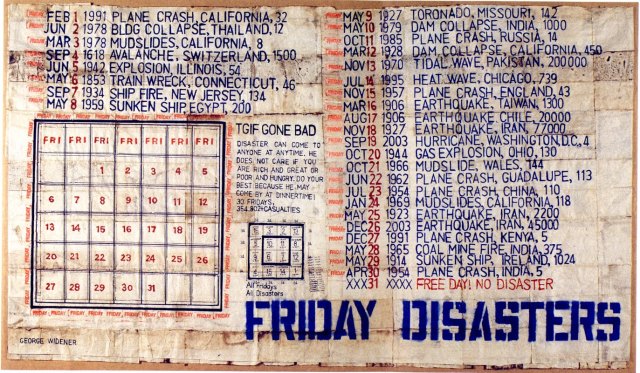 I have a lot of trouble with the term “Outsider Artist” as there is a real danger that the viewer comes to the work with negative preconceptions –the title immediately categorises the work as Other, placing it on a lower footing to “Insiders”. That said, and here is the problem, Widener’s autism undoubtedly drives his work, so it is vital information for the viewer. This is a problem without a simple solution and I am far from the best person to
address it – all I know is that I love the work of George Widener and so should you.

Once again, the jar of pickled moles from Grant Museum of Zoology, University College London. Because this picture deserves an encore.

I’m going to finish my choices with a jar of moles. This is held at The Grant Museum of Zoology at UCL and is disgusting and amazing. What more can I say – it’s a jar of moles…

Thank you so much to Neil for introducing such a fascinating range of things! For more from the ridiculously interesting mind of Neil, check out his posts on the New Art Gallery Walsall website here.